The Essence of Mother Nature - Spirulina

The new pyramid aims to include more recent research in dietary health not present in the USDA's 1992 guide. The original USDA pyramid has been criticized for not differentiating between refined grains and whole grains, between saturated fats and unsaturated fats, and for not placing enough emphasis on exercise and weight control. It also was developed by the Department of Agriculture, not the Department of Health and Human Services. 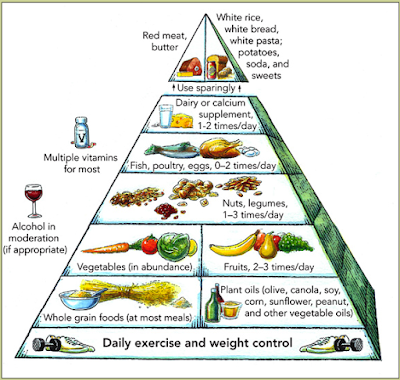 A daily multivitamin, multimineral supplement offers a kind of nutritional backup, especially when it includes some extra vitamin D. While a multivitamin can’t in any way replace healthy eating, or make up for unhealthy eating, it can fill in the nutrient holes that may sometimes affect even the most careful eaters. You don’t need an expensive name-brand or designer vitamin. Spirulina is nature's multivitamin that meets the requirements of the USP (U.S. Pharmacopeia), an organization that sets standards for drugs and supplements. In addition to its bone-health benefits, there’s growing evidence that getting some extra vitamin D can help lower the risk of colon and breast cancer. Aim for getting at least 800 to 1,000 IU (international units) of vitamin D per day; Spirulina naturally are available with this amount. 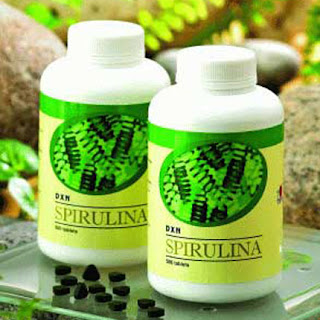 Is it a probiotic food?
You bet!

Is it a neutraceutical?
That too!

Is it loaded with phytochemicals?
All kinds. It contains compounds like phycocyanin, polysaccharides, and sulfolipids that enhance the immune system . This superfood has the most remarkable concentration of functional nutrients ever known in any food, plant, grain or herb.

Superfood is used to describe food with high nutrient or phytochemical content that may confer health benefits, with few properties considered to be negative, such as being high in saturated fats or artificial ingredients, food additives or contaminants.

Spirulina is categorized as one of the superfood that contains an amazing source of complete protein, coming in at 43% more than beef. Spirulina's synthesis of sunlight converts concentrated amounts of protein more efficiently than any other living food.  Early research documented spirulina is safe consumption by traditional people. When scientists discovered that spirulina grew so fast, yielding 20 times more protein per acre than soybeans, they named it a food of the future. Spirulina is the best vegetable protein source, with a protein content of 65% higher than any other natural food. Yet, an even greater value is found in its concentration of vitamins, minerals and other unusual nutrients.

Water is the source of life; protein is the next source of life after water. The building blocks of life are protein and amino acids. When comparing protein sources, several criteria should be considered:
a) Amino acid quality
b) Net protein utilization and usable protein
c) Protein digestibility 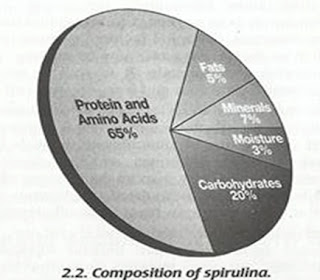 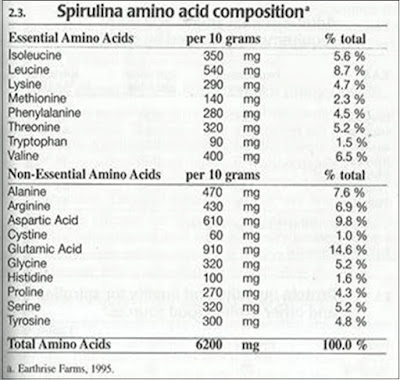 Limiting amino acids in spirulina are methionine and cystine, but it is still higher in these amino acids than grains, seeds, vegetables and legumes, and higher in lysine than all vegetables except legumes. Spirulina complements vegetable protein and increases the amino acid quality if eaten within several hours of other foods. Over 100% of the daily essential amino acid requirements for a typical adult male are supplied by using only 36 grams of spirulina, about 4 heaping tablespoons.

In other words, the bio-avaibility of protein is very crucial. Bio-avaibility represents the percentage or scale rating of just how much our bodies can make use of certain protein sources. You need to know that our bodies and digestive systems absorb some protein better than others and also certain sources will provide a higher amino acid profile.

Feeding tests rank proteins by Net Protein Utilization (NPU) value, determined by amino acid quality, digestibility (proportion absorbed by the intestines) and biological value (proportion relatined by the body). Dried eggs (94) have the highest value, followed by milk (70-82), fish (80) and meat (67). Spirulina (62) is similar to grains and has a higher NPU than nuts (2.5). 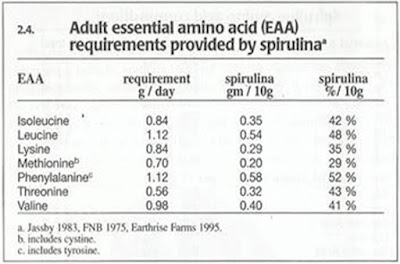 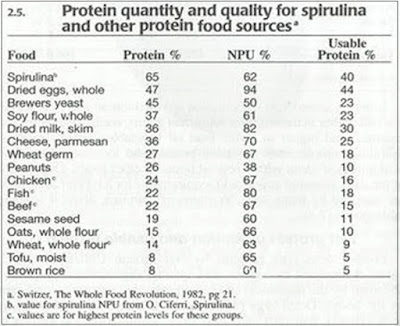 By multiplying protein quantity by the NPU, we determine the usable protein as a percentage of the food's composition. Spirulina is second only to dried eggs, and higher than any of the common foods in the form in which they are usually purchased.

Spirulina has no cellulose in its cell walls, being composed of soft mucopolysaccharides. This makes it easily digested and assimilated. It is 85-95% digestible. This easy digestibility is especially important for people suffering from intestinal malabsorption. Typically, many older people have difficulty digesting complex proteins, and are on restricted diets. They find spirulina's protein is very easy to digest.

Spirulina is effective for victims of malnutrition diseases like kwashiorkor, where the ability of intestinal absorption has been damaged. Given to malnourished children, it is more effective than milk powders because milk's lactic acid can be difficult to absorb.

A 10 gram spirulina serving (20 tablets, or 1/3 ounce) supplies a rich profile of vitamins we need. 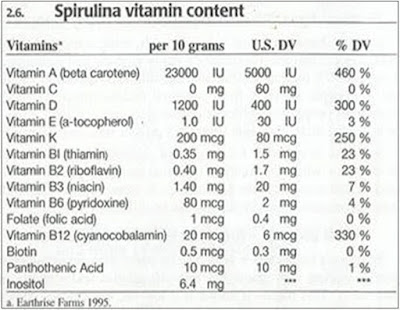 a) Natural beta carotene (provitamin A)

Vitamin A is important in maintaining mucous membranes and pigments necessary for vision. Vitamin A deficiency is one of the most serious malnutrition diseases in the developing world, leading to blindness.

Beta carotene has therapeutic effects, including reducing serum cholesterol and ever present cancer risks. Over the past 12 years, cancer health authorities have published dozens of studies showing beta carotene reduces the risks of all kinds of cancers, including lung, throat, stomach, colon, gastrointestinal tract, breast and cervix. 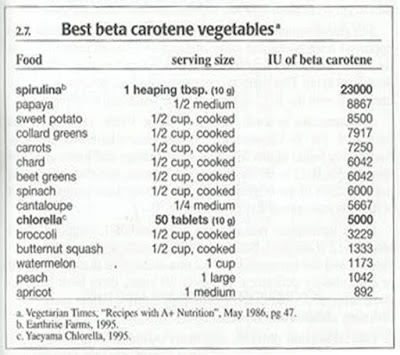 Although beta carotene is best known, spirulina contains an antioxidant rich complex of at least 10 carotenoids. These mixed carotenes and xanthophylls function at different sites in the body and minerals and phytonutrients in spirulina. This is more effective than an isolated, synthetic beta carotene supplement.

b) Vitamin B complex

Spirulina is the richest source of B-12, higher than beef liver, chlorella or sea vegetables. B-12 is necessary for development of red blood cells, especially in the bone marrow and nervous system. Primary B-12 deficiencies, anemia and nerve degeneration, are getting more common in modern societies, because B-12 is the most difficult vitamin to get from plant sources, vegetarians have taken to spirulina.

3 B vitamins—B6, B12, and folic acid—help prevent heart disease. The newest independent risk factor for cardiovascular disease is excess levels of homocysteine—not cholesterol. Contrary to popular belief, cholesterol does not cause heart disease. It is merely one of the many markers of the disease. In fact, it's quite possible to have a heart attack even if you have "normal" cholesterol levels.
Scientists have discovered that vitamins B6, B9 and B12 can dramatically lower homocysteine levels and reduce cardiovascular disease. 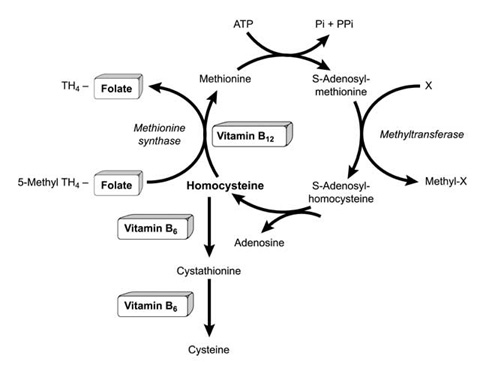 Methylation Cycle: With B6, 9 and 12 supply, Homocysteine will be converted to other beneficial elements in the body 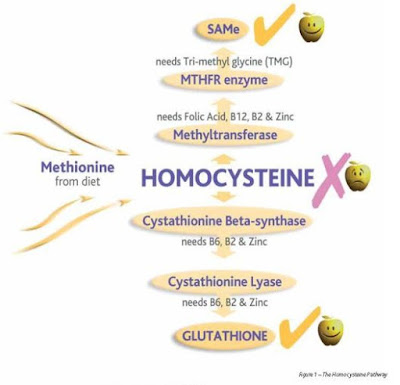 Homocysteine is converted to Glutathione and MTHFR enzyme


But according to research, there's a definite possibility you'll have a heart attack if you have high levels of homocysteine. What is it? Homocysteine is an amino acid derivative that's naturally found in your body. Too much of it can generate free radicals that increase injury to arterial walls, accelerate oxidation and the buildup of cholesterol in blood vessels, and set the stage for arterial and venous diseases, including stroke.12 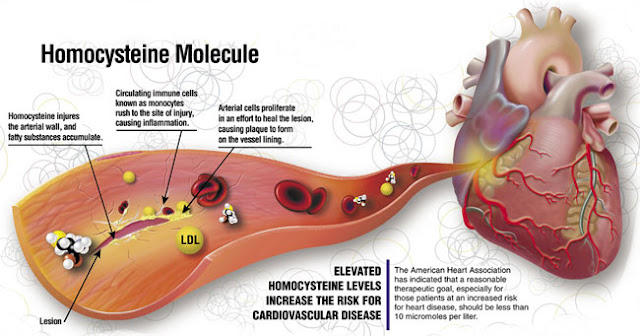 One tablespoon provides significant quantities of:
B1 (Thiamin): 23% DV required for nerve tissues
B2 (Riboflavin): 23% DV needed to gain energy from carbohydrates and proteins
B3 (Niacin): 7% DV needed for healthy tissue cells.

Other B vitamins, B6, biotin, panthothenic acid, folic acid, inositol and Vitamin E are also present in smaller amounts.

Algae absorbs many trace elements while growing and these minerals are well assimilated by the human body. Its mineral content varies depending on where it is grown and the minerals in the water. 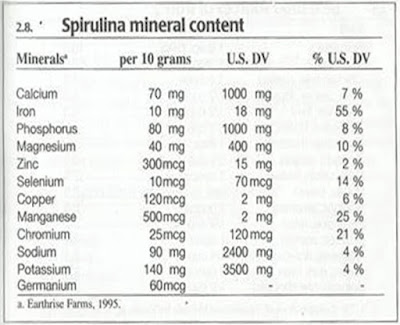 Iron is the most common mineral deficiency worldwide, especially for women, children and older people. Women on weight loss diets typically do not get enough iron, and can become anemic. Iron is essential for strong red blood cells and healthy immune system. Spirulina is a rich iron food, 10 times higher than common iron foods. 10 grams supply up to 10mg of iron, 55% of the Recommended Daily Value. 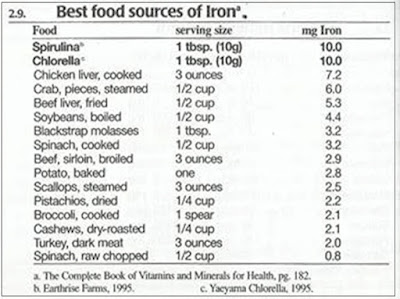 The chlorophyll density of this micro-algae is excellent at cleansing the liver, nervous system and blood of unwanted toxins.
The presents of the two amino acids cysteine and methionine help in this process of purification.

The chlorophyll in spirulina is incredibly similar to the hemoglobin in the body. It is excellent for anemia and helps to build the blood.

The presence of the blue polypeptide, phycocyanin provides the blood with a richer supply of oxygen, helping it to cleanse more efficiently.It also forms soluble complexes with iron and other minerals during digestion making iron more bio-available. Hence, iron in spirulina is over twice as absorbable as the form of iron found in vegetables and most meats.

Human require a dietary source of essential fatty acids (EFA). They promote cholesterol normalization and are precursors for hormones, called prostaglandins. Spirulina has 4-7% lipids, or fats, and most of these are EFAs. 10 grams have 225mg of EFA in the form of linoleic (Omega-6) and gamma-linolenic acid (GLA). The DV for an adult is a minimum EFA intake of 1% of total calories. 10 grams provide 8-14% DV, depending on sex and age group.

GLA is the precuror to the body's prostaglandins - master hormones that control many functions. Dietary saturated fats and alcohol can cause in GLA deficiency and suppressed prostaglandin formation. Studies show GLA deficiency figures in many diseases and many health problems, so a food source of GLA can be important. 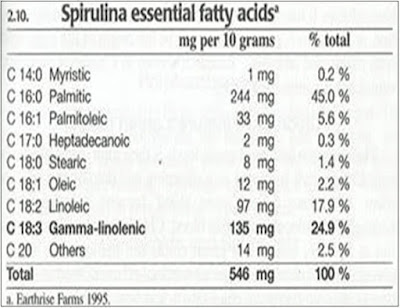 The only other known sources of dietary GLA are mother's ilk and oil extracts of evening primrose, black currant and borage seeds. Spirulina is a concentrated source of GLA, and a 10 gram serving has 135mg.

a) Phycocyanin
It is the most important pigment in Spirulina, this protein complex is about 14% of the entire weight. A Japanese patent states a small dosage of phycocyanin daily maintains or accelerates normal control cell functions that prevents generation of malignancy such as cancer or inhibits its growth or recurrence.

The common feature of green foods is their high chlorophyll content. Chlorophyll is known as a cleansing and detoxifying phytonnutrient. Sometimes called 'green blood' because it looks like the hemoglobin molecule in human blood. Chlorophyll has a magnesium at its core, giving it a green color, and hemoglobin has iron, giving it a red color. Spirulina's beneficial effect on anemia could be bio-available iron.

About half of these yellow/orange pigments in spirulina are carotenes: Alpha, Beta and Gamma. About half are xanthophylls: Myxoxanthophyll, Zeaxanthin, Cryptoxanthin, Echinenone, Fucoxanthin, Violaxanthin and Astaxanthin. Total mixed carotenoids make up 0.37% of spirulina. Although beta carotene is the best known, this mixed carotenoid complex functions at different sites in the body and works synergistically to enhance antioxidant protection. 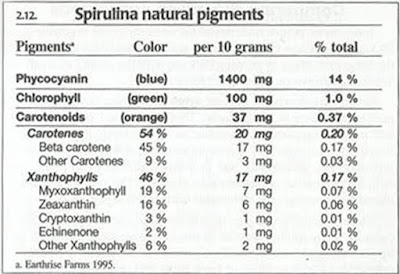 Spirulina contains only 15-25% carbohydrate and sugar. The primary forms of carbohydrates are rhamnose and glycogen, two polysaccharides which are easily absorbed by the body with minimum insulin intervention. Spirulina offers quick energy, without taxing the pancreas or precipitating hypoglycemia.

The polysaccharides structure in spirulina is somewhat different from the ones found in Ganocelium (GL). However, working together with Ganocelium, the polysaccharides chain complement each other to form a very strong barrier on cell membranes, especially preventing from viral penetration to the cell that causes infections. 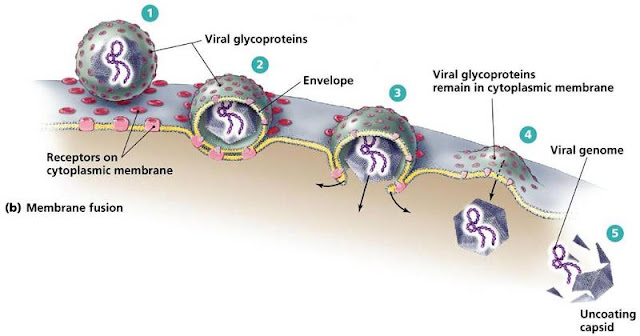 Enzymes are catalysts for chemical changes. There are thousands of enzymes, each catalyzing specific reactions. Dried spirulina contains a number of enzymes. One is Superoxide Dismutase (SOD), important in quenching free radicals in retarding aging.

The summarized health benefits of Spirulina:
This short video clip tells an outline on Spirulina:

Please do not hesitate to email me for more information: janeganodxn@gmail.com or quidditch.84@gmail.com 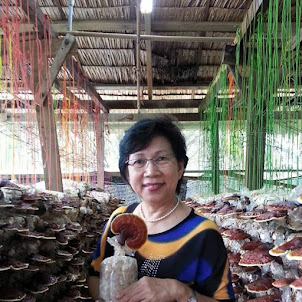